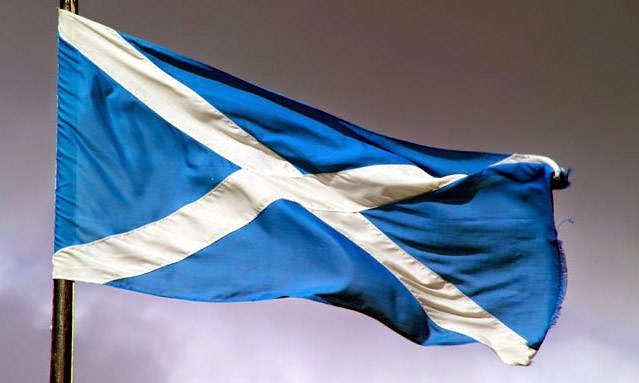 A very different post from me today. As I mentioned last week, my blog is no longer connected to my online shop, so although I do love fashion, I have also grown to love blogging and want to talk about everything that goes on in my life, not just fashion. So a bit of diversity for you all!

I was invited to a very interesting evening at Carlisle cathedral to a talk by Alex Salmond, First Minister of Scotland to discuss Scottish Independence and more specifically how it would benefit the North West.
I can't say that I am totally opinion less about Scotland becoming independent. I am not totally convinced that the great passion for this independent Scotland stems from the right reasons. Everyone knows that Scotland, Northern Ireland and Wales on the whole (I really am not generalising), have some dislike with being part of The United Kingdom. I do understand that they have been powerful independent countries in the past and historically England have bullied these countries. However, that was then and this is now. I do feel, rightly or wrongly that part of this desire for independence comes from being told from a young age that no one in their right minds would want yo be connected with England. I understand that Scotland is a very proud country and rightly so, however, they do carry a grunge around with them. I will always support Scotland in a sport activity if England are not playing, but as we all know they would rather support the devil itself than ever support England. Anyway, I digress.

I was very happy to come to come along to this event. It was a very exclusive elite number of attendees, approximately 40 and Ian and I representing the norm!

Alex Salmond( first minister of Scotland) clearly wanted to draw comparisons between the North of England and Scotland. You could tell that he wanted to makes us allies and make us feel like the North of England Scotland were the poor relatives in the UK and it was us V London. It was clearly a tactical move as there are many more common ties with The North than with the South.
Salmond clearly quoted Shakespeare with it being his 450 this birthday on 23rd April and also embraced the fact it was St George's day, but the sad reality is no one in Scotland would celebrate this!
He went onto push his point that the North was considered insignificant by London and there was a serious economic imbalance between the North and the South. He threw out a few statics :
The transport spending per head in the UK:
London £2700 p/h per year
North West £130 p/h per year
North West £5 p/h per year
They are quite shocking stats and they clearly do show a massive imbalance, however, if you consider the dense population in the South East there is clearly a much greater need for efficient public transport. That is not to say that us northers should just be neglected and looking at these statistics the gap is clearly too great. 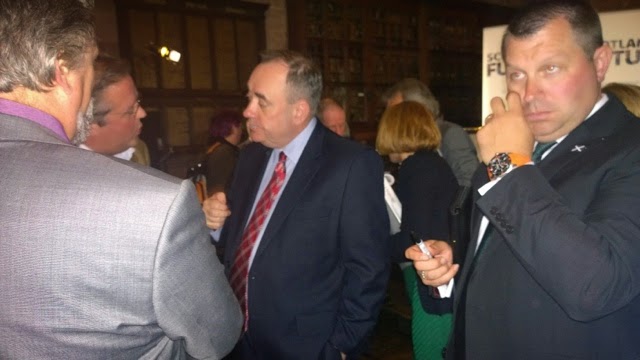 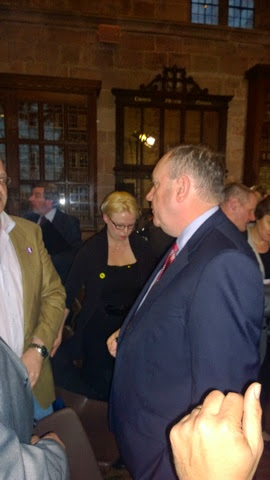 Salmond briefly discussed the Monarchy and pointed out Scotland would still be part of the common wealth and share the same monarchy. He drew an example of the warm reception that Kate and William recently received in Australia and NZ.I bet to differ in my opinion on this. I doubt that the Scots will look forward to a visit from the royal family in the future. It will be more like the relationship Ireland has with the royal family. I remember the queen visited Dublin in 2011 for the first time since 1911! Security was tight and it seemed that the whole city was on alert. I think if Scotland become in dependant they will reject anything "English", especially the monarchy.

We briefly (or not so briefly) heard about how the North was not featured in the government's plans for high speed rail. He said that the plans for high speed rail were not planned to reach Manchester until 2032 and decades until it hits the boarders. Salmond's proposal was to start building the high speed rail from the north and build southwards. However, he has no firm plans in place and in fact will not even start discussions on this for a few more weeks. For me, this was a very weak argument.

During questions and answers, the topic of the currency came up. Salmond made it clear that they wanted to keep the Sterling. He said that it would cost British business' £500 million if Scotland were un-able to keep GBP. A bit of a flippant comment as we don't know any of the other facts, so I took this statistic with a pitch of salt.

Scott introduced us to Alex at the end of the event, he seemed friendly and signed my book. It was clear that he was a politician and certainly seems charismatic and very passionate about an independent Scotland.

For me, it was interesting to hear Salmond's points. However, I wasn't convinced that was much substance beyond his points. There seemed to be alot of "ideas" but not much to back it up.In September, Scotland will have a referendum to vote for Scottish Independence. I personally feel that either way the vote goes it will close.Whatever the outcome, there will be strong differing opinions and the situation will never be fully resolved. As an English person I would feel quite sad to loose Scotland as part of the United Kingdom, but it would certainly be interesting to see how or if life would change. I only hope that if Scotland do opt to be independent they are doing it for the right reasons, i.e. they feel that Scotland would be better as an independent country and as people they will be better off and not because of their dislike for anything English.