When it comes to my wardrobe, I have a very eclectic mixture of clothes and accessories. I am often swayed by what is in trend at that time, which is dictated to us my the mass media, but I like to think that I tend to stick to colours and styles which suite my build and colouring. I will also buy from anywhere if I like the outfit or accessory. My collection consists of many Primark and New Look pieces alongside quite a vast range of designer dresses, bags and shoes. I am a fan of a few designers; I adore Mulberry bags and I am lucky enough to have a husband who understands my love for these bags and often treats me to a new bag. Although, this has certainly decreased post Scarlett! I also love Jimmy Choo and Louboutin shoes. I like Marc Jacob dresses for the simple style and good fit. My ultimate goal is own a vintage Chanel bag and a Hermes Birkin...
This lead me to think about looking a few of my favourite pieces every week and a brief look at the designer. This week, I'd like to show you a lovely orange, Alexander McQueen clutch bag. This was an impulse buy, which I treated myself to. It was most certainly a want product as apposed to a needed one. I have an abundance of small clutch bags. I love the idea of the clutch, but generally don't get much use out of them as I (A) don't go out as much since having Scarlett and (B) need something much larger to carry all the guff that is needed with a small child. I have tried to get as much wear out of this as possible though and I think with most bags like these, they are classic and rarely age. I love the colour of this clutch. I adore bright colours and think that a bag is a great way to introduce colour into an outfit. Often we want to wear a conservative colour, but feel a little dull, a bright bag is the perfect touch. I only have this bag and  the classic Alexander McQueen skull scarf in black and red. I am still un-sure on this purchase. I think I committed the ultimate sin and bought it as it was very much in trend. I can't say I have the same fondness for the scarf as I do the clutch. I think I was sucked in by the mass marketing of this scarf.
I remain un-decided when it comes to Alexander McQueen designs on the whole. I do like many of his bags, particularly the ring clutch, but I have never really seen any clothes that I have been that drawn to. 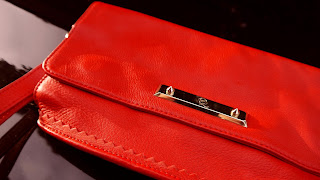 McQueen was brought up in a council flat in London. He was the youngest of six children. It is reported that he knew he was gay from the age of six. His passion of clothes came from making dresses for his sisters as a child. He left school with almost no qualifications, but managed to get an apprenticeship with a Savile Row tailors. This is where his career began. After he he won a place to study fashion at Saint Martins and achieved a Masters degree. His entire graduation collection was bought by Isabella Blow, it was from here that he launched his successful fashion career.
McQueen's success and reputation grew and he was famous for lavish, un-conventional fashion shows, all with a shock factor. He worked with all of the ultimate celebs and became famous for his "bumsters" low rise jeans and ofcourse the iconic skull to which he will always be remembered.

On the 11th February 2010 McQueen was found hanging in his West London flat. No major reason was given, but he was known for having severe depression and anxiety and tried to suppress this with heavy drug use. 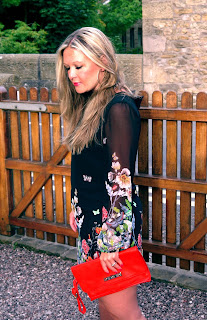 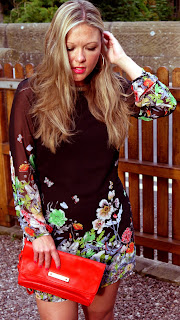 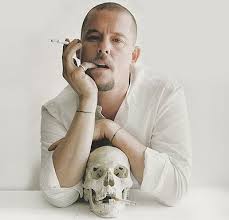 It is such a shame that many talented people's lifes end in such a way and we must wonder if the average person from a working class background can cope with such adoration and live in this un-realistic bubble that many celebs in the fashion world do.