Pure London has just taken place again. Anyone who is in the retail industry knows that this is one of, if not, the most important show for retailers to check out the next seasons looks.
The show seemed a little quiet this year, not quite the same buzz I have once seen. Is it because of the ever suffering retail industry, the blistering heat or perhaps the fact that most exhibitors were quite annoyed at the high prices that were being charged to exhibit. I'm not sure. However, a few were missing.
My favourites: 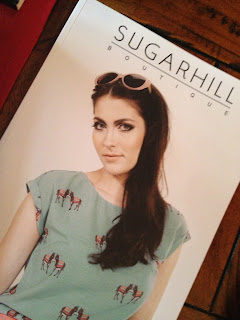 My ultimate had to be the Sugarhill stand. It was light and airy and not too cramped. So many of the exhibitors try to fit every single item onto their stand and the result is that it looks more like a market stall and a real turn off. On the opposite end of the spectrum, many brands did their best to just have 3 items hanging on a rail to give the impression that they were an exclusive brand. Again, to me, a turn off. Sugarhill Boutique had the balance just right. The colours for next season were bold, but fresh with alot of navy and aqua. Some new styles, such as the introduction of the midi dress, along with many old favourites and of course the famous cute animal print. I was a little spoilt for choice, but think that I choose well. Only another 6 months to wait to see them again!
Another favourite was Missco Girl bags. Their stand, again was clean and not cramped. Enough pieces to have a good noisy around without being swamped. They had kept the traditional satchel which is so,so popular, but they had also had some new ingenious new designs, very quirky. I really loved the fold over clutch:-) Again, the colours were bold, Orange and navy featured strongly. I happily placed my next order and am very pleased to say that these will be here by the end of September, yey!
I spotted a new brand that I quite fancy introducing. It is called Fever. I have seen it before, it is already quite established. I liked the designs of the dresses, they seemed cut well and quite flirty and feminine. I think that the style would really suit the shop, very "Yummy Mummy".
I brought the look book home and will spend a few hours pouring through it and choosing what to buy for next season.

The show, as a whole, was "OK". There were only a few brands which excited me, many same to be stocking very "safe" clothing for next season. Perhaps it is the case that thew new inspiring new brands simply couldn't afford to exhibit, which seems a real shame for them and also retailers. We need something new and refreshing, not the same old, same old...
The atmosphere was as ever quite pretentious, with a lot of insincere kisses on cheeks and hugs. However, it is always fun and nice to be in an industry where people clearly enjoy what they do.