OK, I am exaggerating slightly, but yesterday felt like a scene from the film Planes, Trains and Automobiles, if you are an 80s child you'll know what I'm talking about!

After having no car for the past 2 weeks as it broke down on the way to Scotland, we finally got it back 2 days ago. The bill, £5600. Thank god, we didn't have to pay it as it was still under warranty, but still, what a job. I took it for it's first real journey to see a customer "Down South". As I reached Stratford upon Avon (about 3 hours into the trip) I knew something was not right. The car smelt strongly of oil, and it was loosing power. Oh no, not again! I called recovery, only to be told that our breakdown cover had expired! After calling everyone, I gave in, no one would pick me up. I had to drive at 10mph, annoying everyone all the way into Stratford to a garage and abandon the car there. I was then pointed in the direction of a train station, what has happened to male chivalry? So I made my way over the industrial estate and headed towards the station. I was dressed for my meeting, equipped in super high heels and a jacket and it was freezing yesterday! You may have been to the train station at Stratford-upon-Avon, it is just a shed with a coffee kiosk, which of course only accepted cash. I had only my card. I sat, frozen on the platform for 1 hour waiting for the train to Birmingham Moor Street. I took the school train, with approximately 300 angry, loud teenagers. I realised when I arrived in Brum one hour later that my next train left from a different station. I do not know Birmingham at all, in rush hour I had to make my way through the crowds and ask for directions. It was made all the more confusing as they were having a major re vamp at New Street and it was just thousands of tired, stressed commuters trying to find their train. I had another hour to wait.


Every cloud has a silver lining

As I had one hour to kill and I was in the UK's second largest city, I thought I would make the most of it and headed to the Bull Ring. In the few moments I had to spare I managed to purchase this dress fro Mango: 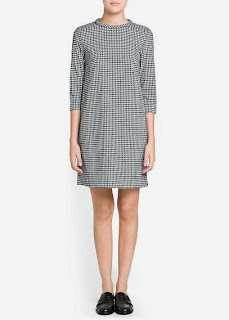 I thought that was quite good going...well I needed something to cheer me up! This dress is not my usual style, but I like the warm, wool texture. It was very 60s and I love this look. I am going to team it up with knee high boots, black tights and some chunky gold jewellery. It should make a good work dress.

I finally got my train and arrived back in Preston at 9 and then had a 45 minute taxi ride home. I made it back home 12 hours after leaving, car less and didn't even make my meeting. On the positive side, Scarlett stayed up for me with a big cuddle and I got a new dress:-)